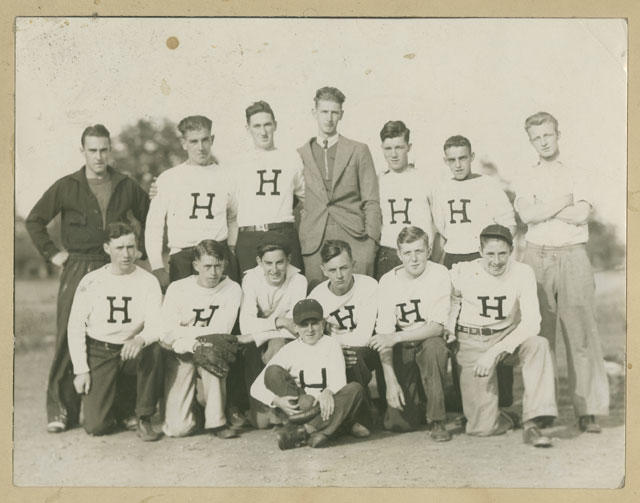 Thomas J. Connors of Halifax, N.S., was one of six children of William P. and Mary Ann (Guildford) Connors (O'Connors). He attended the Christian Brothers school in Halifax until the age of fourteen when he went to work at sea. By 1903 he was working as a stevedore and in the following year, he was employed as a freight handler with the Intercolonial Railway. He remained at ICR, later Canadian National Railway, until his retirement. Connors was also an amateur sports enthusiast, known to sportsmen in Canada and the United States as "Old Sport". As a youth, he participated in tug-of-war contests and rowing and later he became a trainer in rowing and boxing. He died, unmarried, at the age of 87 on 4 April 1949 at Halifax.

Collection consists of photograph prints and also engravings and lithographs collected by Connors, predominantly relating to sports in Nova Scotia. Includes group portraits of school, university, city, and special teams as well as invidual portaits of athletes in sports such as baseball, basketball, bicycling, boxing, football, rugby, soccer, track and field, and tug-of-war; several images of rowing races and crews, oarsman George Brown of Purcells Cove, and engravings advertising races and regattas, 1830s. There are a small number of group portraits with Tom Connors and fellow oarsmen and a few of William P. Connors, Maritimes champion in shotput. Images also include Halifax, Dartmouth and Glace Bay fire and police departments; parades; St. Patricks High School and band; scenes of Halifax harbour, Northwest Arm, businesses, and street scenes; Nova Scotia fishing villages; and schooners and other vessels. The majority of photographs were taken by local professional photographers including Climo, Notman, Gauvin and Gentzel, A.R. Cogswell, Commercial Photo Service, J. Hayward, Allen Fraser, and others. Many photographs were annotated on their mounts by Connors. Also included is a scrapbook compiled by Connors concerning current events in the 1930s-40s, mostly World World Two and affairs in Canada, Europe, and Asia.

Source unknown, donated some time after Connors' death in 1949 and prior to 1959.

Records relating to sports and sporting history of Nova Scotia also found in the James W. Power collection of scrapbooks.