Fonds consists of correspondence and other records documenting Young's law practice, political offices, and his family and personal business affairs. Includes letters to and from Young regarding political matters, such as elections, fisheries, roads, and the Windsor-Annapolis Railway; and legal opinions and cases dealt with including the estate of Hon. Michael Tobin. Letters between Young and his father and brothers George and Charles concern personal news and family business matters. Other records in the fonds include Young's summaries of cases heard before him in the Supreme Court, Court of Vice Admiralty, and the Court of Marriage and Divorce, ledgers, day books, financial statements and accounts, drafts of speeches, newspaper clippings, law books, personal diary, and journal of a trip to England. Fonds also contains correspondence, legal documents, and other items concerning the estate of William Young and others, 1887-1919.

Fonds consists of operational records created by the NS Steel and Coal Company Ltd.'s New Glasgow and Sydney Mines offices. The most extensive section concerns the Old Sydney Collieries operations at Sydney Mines, containing letter books and correspondence files of the stores department (1905-1917), which detail the ordering and purchasing of supplies and equipment for the mines. In addition there are financial records such as cash books (1905-1913), general ledgers (1895-1915) and a very early workmen's book (1861-1864). Other records originate from the New Glasgow office and include general correspondence (1935-1941), corporate records such as printed annual reports and financial statements of NS Steel and Coal and its parent companies (BESCO and DOSCO), by-laws and articles of association, prospectuses and charters, and internal publications such as promotional booklets and agreements with labour unions. There are also a few files believed to have been created by former chairman Thomas Cantley, including two case files on the coal tariff issue (1912-1927) and a mine fire inquiry (1929), blueprints of mine sites in Sydney and schematic details of mining equipment used, and coal and steel production and sales figures (1898-1913). Finally there are later correspondence files and reports on mine performance and production at the Florence and Princess Collieries, 1953-1966.

Fonds consists of records documenting Nova Scotia's commission of inquiry into municipal boundaries and representation. Includes documents constituting the inquiry, commissioner's correspondence and briefs and submissions (incomplete), as well as two copies of the report.

Fonds consists of teacher training notes, lesson plans and tests (ca.1930-ca.1932); business correspondence (1935-1949); teaching contracts (1930-1948); Elsie Mosher’s grade 9 tests (ca.1926); programs from the Lunenburg County Teachers’ Institutes (1944-1946); a few personal correspondence (1936, 1939); a certificate for school administration (1930) and a certificate for a pottery class taught by Alice Egan Hagen, with a photograph of the class (1943); living expenses at Sable River (ca.1936-ca.1938); meeting minutes for the Mahone Bay Home and School Association (May 1945); and a published book The School Teacher’s Music Guide by L.C. Venables (1930-1931). Also includes 2 photograph albums of images of the schools and communities where Elsie Mosher taught, groups of students identified by name, physical education classes, other teachers as well as Elsie, and friends during holidays. The records document the life of a teacher and the education system in early 20th century Nova Scotia.

Collection consists of 143 music record albums (LPs, 78s and one 45) of international country music star Hank Snow, including albums released in Japan, East Germany, Australia and the United Kingdom; a Grand Ole Opry radio broadcast of Hank Snow; and recordings sold only to radio stations by Thesaurus Programming Service. The Collection spans Hank Snow’s United States recording career starting in the early 1950s up to 1985 when he stopped recording. The Collection was assembled by life-long fan Gordon “Gordie” Silver, who bought his first Hank Snow album in 1955 at the age of 10 and continued collecting until 2018.

Gordie’s collection also includes Hank Snow’s E-Z Method for Spanish Guitar complete with instruction booklet; a booklet listing all of Snow’s recordings with Bluebird and with RCA Victor Records up to 1968; a 1984 yearbook from the Hank Snow International Fan Club and a published songbook “Hank’s Favourite Songs” (cover is missing).

Fonds consists of files documenting Triad productions and projects, as well as some corporate business records such as incorporation documents and financial statements. The production files contain textual records, graphic materials and sound and moving image materials. The textual records include correspondence, project treatment proposals and synopses, applications for funding, important contracts and licensing agreements, scripts, publicity materials, press releases, cost reports, and some publicity stills of performers and locations. The moving image material consists of a few masters plus viewing copies of most of Triad's productions. There are also a few files containing project proposals that were not developed. Production files arranged alphabetically by production title.

Department of Fisheries and Aquaculture

Fonds consists of Fisheries Minister's correspondence files with the Premier, other provincial and federal ministers, the Fishermen’s Loan Board, department staff and the public as well as planning and budget files (1960-1973); Deputy Minister's correspondence files (1942-1993); the Director of Fisheries Division files when it was part of the Department of Trade and Industry (1943-1964); “Deputy Minister’s Library” containing minutes of the Federal-Provincial Atlantic Fisheries Committee and its Sections (1959-1975); Director of Industrial Development Division files managing projects to improve vessels, gear and harbour facilities as well as negotiating funding agreements with the federal government (1961-1991); Product Development Officers’ files containing scientific research reports and experiments’ results, correspondence, proposals, and photographs (1973-1992); and Funding Programs Case Files from several cost-shared funding programs run by the Department alone or in partnership with the federal government (1972-1998). Fonds also includes meeting minutes, agendas, and loan agreements with the NS Resources Development Board (1980-1986), previously known as the NS Fishermen’s Loan Board.

Some major subjects represented in the records include experimenting with fish waste to make fertilizer (silage) for agricultural use; bringing new products to market such as snails and shark; and improving fish preservation, among other subjects. Some major projects of the Department include building the Fraser Mills hatchery and research centre near Antigonish NS (1987-1990), the Billfish experimental fishery (1995-1996), and the construction of 3 steel-hulled fishing vessels (1977-1979).

Fonds consists of photographs taken by Sarah Donaldson Naugle on Sable Island, where she lived for much of her life. Naugle’s subjects include her family (both the Donaldsons and the Naugles) and life on the Island. Sable’s horses feature prominently, as do wrecked ships and their survivors, Island residents, the Life Saving Stations, light houses and other buildings, and assorted features of Island life.

Sarah Naugle was the primary, but not only, photographer of the images in the fonds. Other people, likely family members, also contributed. Family lore suggests Sarah Naugle developed many of the images herself on Sable Island, using both sunlight and traditional methods. Nova Scotia Archives has records of photographs being developed on the Island (RJ Boutilier letterbooks and diaries), making this is a definite possibility. Some images in the fonds are prints, made in the 1950s and 1960s. of earlier images.

Fonds consists of incoming and outgoing personal and business correspondence of William H. Dennis and his son Graham Dennis; administrative records and draft articles from The Halifax Herald staff; speeches; and some photographs. William H. files also include financial and advertising records; and documents on Senate Committee debates on tourism. Graham’s files also include newspaper and employee administration files; and briefs to Senate Committee hearings on Mass Media (1970) and Royal Commission on Newspapers (1981); and many news clippings on various topics. Also includes a published highway map of Eastern Canada and Adjacent States (1931).

The fonds has 4 groupings: Graham Dennis files, William H. Dennis files, Halifax Herald files, and Family files. Graham organized his files chronologically by month and filed everything under Correspondence, with a few files arranged by name of correspondent or subject, until 1981. Starting in 1982, Graham’s files contain mainly routine correspondence. His father William H. organized his files in alphabetical order by last name of correspondent or by subject. William H.’s files are further divided into his activities as senator, as newspaper publisher, and personal business. Family files include a small amount of business correspondence of the first Senator William Dennis, and family photographs. Halifax Herald files contain correspondence on editorial matters and employees.

The contents of the fonds document the newspaper publishing business, the public duty of newspaper publishers/freedom of the press, the development of tourism in Nova Scotia, politics in the 20th century, and the International Fishermen’s Schooner Race.

Fonds consists of files accumulated by Eric Dennis between 1972 and 1977 as Executive Director of the Nova Scotia Communications and Information Centre and include records related to the Centre’s budget (1972-1977), the province’s hosting of the 1973 Premiers’ Conference, speeches of Premier Gerald Regan, Royal Visits (Primarily 1973), and the Centre’s production of promotional movies as well as materials related to industrial and tourism promotion including events such as the Tournament of Roses Parade (California), the Boston Tea Party (1976 and 1977), Lobster Luncheons (1974), and Expo ’75 in Osaka, Japan. 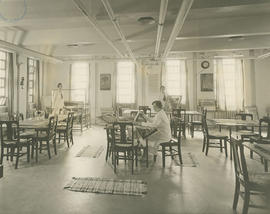 Fonds consists of oral history interviews conducted by Keddy in the course of her research. Recordings contain interviews with over eighty women and cover topics including the social history of nursing in Nova Scotia in the 1930s, the lives of working women in the 1920s and 1930s, retired nurse leaders, and experiences of Black women in the nursing profession. The interviews have served as research data for papers and articles written and/or published by Keddy.

Fonds consists of records documenting the commission's role in overseeing the expenditure of relief funds and the reconstruction of Halifax and Dartmouth following the 1917 explosion. Records also document the work of the Halifax Relief Committee, which was superceded by the commission in 1918.