Fonds consists of records arising from and documenting the functions of the lieutenant governor.

Fonds consists of photographs taken by Sarah Donaldson Naugle on Sable Island, where she lived for much of her life. Naugle’s subjects include her family (both the Donaldsons and the Naugles) and life on the Island. Sable’s horses feature prominently, as do wrecked ships and their survivors, Island residents, the Life Saving Stations, light houses and other buildings, and assorted features of Island life.

Sarah Naugle was the primary, but not only, photographer of the images in the fonds. Other people, likely family members, also contributed. Family lore suggests Sarah Naugle developed many of the images herself on Sable Island, using both sunlight and traditional methods. Nova Scotia Archives has records of photographs being developed on the Island (RJ Boutilier letterbooks and diaries), making this is a definite possibility. Some images in the fonds are prints, made in the 1950s and 1960s. of earlier images.

Fonds consists of records documenting the functions of the Department of Health and its predecessor, the Provincial Board of Health. Includes case files and other material, 1901-1976; Inspector of Anatomy registers, 1923-1940; and Atlantic Health Unit associate director's correspondence and other material, 1971. 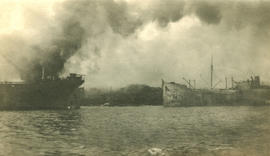 Fonds consists of two images of ships burning in Halifax Harbour after the explosion of 1917. They are unusual in that they are taken from the water. 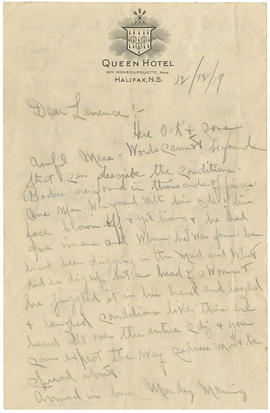 Fonds consists of two letters written to members of Mr. Brown's family in the United States describing the situation in Halifax in the aftermath of the Halifax Harbour Explosion of 1917. 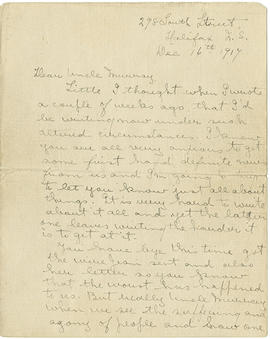 Fonds consists of a pass for access for the devastated area issued by the City of Halifax and a sixteen page hand-written letter by Ethel Jean Bond to her uncle, Murray Kellough, of Winnipeg, Manitoba. In her letter she describes the devastation of the Halifax Explosion, the death of her father, and the injuries that her sister Bertha sustained, and discusses the impact on various neighbours in the vicinity of Kaye Street in Halifax, including the Swetnams, Killams, and Theakstons, among others. 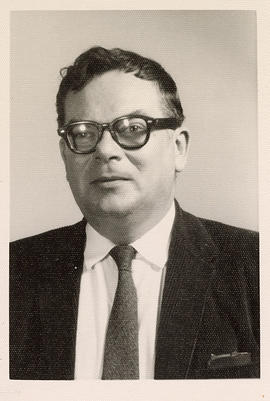 Fonds consists of 146 scrapbook albums (ca1919-1974) assembled by David E. Lewis, containing his personal and business correspondence; clippings of articles written by or about him; book reviews; personal, family and work-related photographs; legal documents such as teaching contracts; and memorabilia including plane tickets and pay stubs from stories sold. These are interspersed among clippings of newspaper and magazine articles, printed jokes, comic nude cartoons, and images of entertainers, selected for their relevance to Lewis’ life experiences and/or emotional state at the time.

Arrangement is roughly chronological, with some albums covering 1 month in a year and others cover a range from the 1940s to 1970s.

Fonds also includes a notebook of proverbs and lists of books read and movies seen (with annotations) belonging to David E. Lewis’ mother Isabelle Jean (Laing) Lewis (1939-1947) and a typescript of a thesis about David E. Lewis written by Andrea Robbins (2000).

Fonds consists of typed transcripts of the hearings with indexes (1926); annotated drafts of Nova Scotia’s Brief to the Royal Commission and the final published version submitted (1925-1926); financial statements of provincial revenues (1925-1296); a research file of constitution examples from Ireland, South Africa, and Newfoundland 1895-1922 (collected circa 1925); news clippings (1926); 2 printed letters from Premier Rhodes to shippers about possible changes to freight rates (1926-1927); and a published report on the circumstances leading up to this Royal Commission “The Maritime Provinces Since Confederation: A Statistical Study of Social and Economic Conditions During the Past 60 Years” (Ottawa: Kings Printer, 1926) compiled by the Dominion Bureau of Statistics in fulfillment of one of the Royal Commission’s recommendations.

Fonds consists of teacher training notes, lesson plans and tests (ca.1930-ca.1932); business correspondence (1935-1949); teaching contracts (1930-1948); Elsie Mosher’s grade 9 tests (ca.1926); programs from the Lunenburg County Teachers’ Institutes (1944-1946); a few personal correspondence (1936, 1939); a certificate for school administration (1930) and a certificate for a pottery class taught by Alice Egan Hagen, with a photograph of the class (1943); living expenses at Sable River (ca.1936-ca.1938); meeting minutes for the Mahone Bay Home and School Association (May 1945); and a published book The School Teacher’s Music Guide by L.C. Venables (1930-1931). Also includes 2 photograph albums of images of the schools and communities where Elsie Mosher taught, groups of students identified by name, physical education classes, other teachers as well as Elsie, and friends during holidays. The records document the life of a teacher and the education system in early 20th century Nova Scotia.

Fonds consists of exhibits (documents) submitted from Supervisors of Schools in Glace Bay and New Waterford, from Local No. 26 of the Union of Mine Workers of America, and from Dominion Steel & Coal Corporation (1932); written briefs or submissions (1932); research reports from William A. Armour for the Royal Commission (1932); a partial draft of the final report (1932?); correspondence to the Commissioners (1932); and background research files (1931-1932).

Subjects include the terrible social conditions and poverty suffered by fully employed people; school students starving; pricing of coal, customers, and the competition in late 1920s and early 1930s; closure and amalgamation of specific mines; and municipal concerns regarding social welfare particularly in Cape Breton.

Royal Commission Concerning Jails in the Province of Nova Scotia

Commission of Inquiry on the Expropriation of Lands of Lewis Miller & Co. Ltd. by the Nova Scotia Power Commission

Fonds consists of typed transcripts of the hearings for April 11, 12, 19, and 20, 1933; documents submitted as evidence from the Nova Scotia Power Commission including plot plans of the disputed lands along the shores of Big Indian Lake and Five Mile Lake in the Indian River at Saint Margaret’s Bay, NS (1921-1933 collected in 1933); and the original order-in-council dated March 3, 1933 establishing the Commission and appointing commissioners.