Fonds consists of annual reports, governance documents, financial information, newsletters, notices, agendas, membership lists, and promotional materials. The contents of the fonds document the role that the Halifax Club of the Canadian Federation of University Women plays in the local community and the activities it conducts and supports in its efforts to fulfill its mandate.

Fonds consists of directories, membership documents, minutes, correspondence, financial records, newsletters, promotional items, and reports. The contents of the fonds document the operations of the chapter in fulfilling its mandate.

Fonds consists of Carl's letters written to his sister and parents in Halifax while serving overseas between 1916 and 1918. He wrote several times a month and the letters describe Carl's social and military activities in detail, both in France and in England. Included are stories about fellow officers and friends, social and recreational activities such as visits to concerts and the theatre, sports, motor trips, dining out, and card games. There are also descriptions of his war experiences such as learning to fly military aircraft and being exposed to shelling, anti-aircraft guns and bombs. In addition there is a letter to John Bennett (Carl's ancestor), from his brother in Aberdeen, Scotland, dated 19 March 1818. In it Bennett describes his dangerous transatlantic voyage in a small vessel. There is also a letter to Carl from Jessie Bell of London, a cousin, who provides family information and biographical information on Carl and the Bennett family.

Fonds consists of audio tapes that include segments from Carrie Best's radio shows as well as interviews with her about her work. The contents of the fonds document her broadcasting career and record information about her life and her views on racism in Nova Scotia.

Central Board of Agriculture of Nova Scotia fonds

Fonds consists of records created and accumulated by the secretary of the Central Board of Agriculture, particularly during the tenures of John Young, William Scott, and Titus Smith. Fonds includes correspondence, returns, reports, accounts, notes payable, invoices, receipts, by-laws, orders, affidavits, and lists of officers. Volume 1 includes a minute book of the Provincial Agriculture Society from 1818 to 1825. Most of the records in the fonds are relating to local agricultural societies. Fonds is arranged by agricultural society name.

Fonds consists of poetry, newspaper clippings, articles, bibliographies and research notes. There are also indices for a number of serial religious publications including: The Guardian, The Wesleyan, The Presbyterian Witness, New Brunswick Religious and Literary Journal, The Nova Scotia and New Brunswick Wesleyan Methodist Magazine and British North American Wesleyan Methodist Magazine. There is also significant research on centenarians taken from some of the indexed publications. 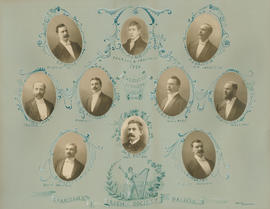 Fonds consists of official records of the society, including executive minutes, committee minutes, constitution and bylaws, financial papers, presidential files, correspondence, and proposals for membership. Also includes programs, addresses and menus for Society events; publications and engravings, and a brief history of the Society compiled in digital format in 2009.

Fonds consists of an Act Book, also entitled "..Register of the Diocese of Nova Scotia and its Dependeces", kept from the time of Bishop Charles Inglis' consecration in 1787 until 18 September 1810. The book contains the names and particulars of men he ordained to the ministry and which parish the minister was licensed to serve in. There is a gap in the book until 1825-1826 when it was kept by his son, Bishop John Inglis, who also included additional notes, 1829-1837. The Act Book also contains rough copies of letters and documents drafted by Charles Inglis before they were forwarded to the addressee, usually officers of state, the Society for the Propagation of the Gospel, and the Archbishop of Canterbury, and two letters written by John Inglis when he acted as commissary to his father. There are also copies of documents by Charles Inglis relating to the proposal to consecrate bishops for the United States, copies of letters he wrote to the commission appointed by Parliament in London stating the losses he sustained as a Loyalist, and a copy of the deed of endowment of St. Pauls Church, Halifax, 1771.

Fonds consists of personal diaries, notebooks, family photographs, a photograph album of ships, Halifax Harbour and Dockyard passes, and home movies. Charles Bryant kept daily diaries of his social activities in Halifax, with occasional references to business contacts, from 1908 to 1956, though not for every year. The notebooks document ships travelling through Halifax Harbour 1895-1920, giving dates of arrival, departure, and freight amounts for lobster and apples, supplemented by photographs of the ships taken during their visit. Album also includes images of ships and parts of the city damaged by the Halifax Explosion of 1917. The home movies show people relaxing at the beach, playing golf and baseball in Stanhope, Prince Edward Island, parts of a family wedding, and landscapes of the Cabot Trail, NS, Lunenburg, NS, and New York Harbor. The movies document the Bryant and Stairs family Christmas in Halifax and vacations in Stanhope, PE during the Second World War and in the 1950s.

a letterbook containing correspondence to McClure, arranged in reverse chronological order. The volume is labelled "North American ... [incomplete - possibly meant North American Gold Mining Company] -- Charles F. McClure - From December 1873 to October 1874". There are two sets of letters in the letterbook: (1) 57 letters,1864-1866, from Benjamin C. Wilson (1832-1905), native of Hants County, and an authority on mining law and goldfields technology. He was apparently a manager of the North American Gold Mining Company at the time the letters were written. He wrote from Waverley either to McClure, or his associate, Charles Barrett, of Boston, providing updates every few days on mining progress. His letters describe equipment used, drilling methods, and similar information. (2) The second set, 166 letters, 1873-1874, consists of miscellaneous correpondence written to McClure in Boston. Some letters are from associates at the mining operations in Waverley, reporting on activities in the mines; others are from business associates in the United States, commenting on mutual investments, other mining ventures, and financial matters. There are also a few letters of a personal nature from friends and family members.