Collection consists of Nova Scotia colonial government records, together with British and French imperial records relating to Nova Scotia, and comprises one continuous sequence of numbered volumes that have been arranged into 28 described series.

Collection consists of original documents, photographs, printed materials, art works, and other items that were inherited and/or collected by Elizabeth Ritchie from other family members. It includes the war-time correspondence of Elizabeth's father, Roland Ritchie, 1938-1947; letters from J. W. Ritchie to John C. Halliburton, barrister, of Halifax, 1830-1832; and documents concerning Elizabeth Johnston Lichtenstein (1764-1848). The latter include a copy of the introduction to her memoirs, Recollections of a Georgia Loyalist (1836) by Hon. William J. Almon, her grandson, and original documents concerning Lichtenstein's husband's and father in-law's activities in Jamaica and Georgia. Collection also includes typescript copies of the writings of Susie (Susanna) Almon and Dr. James R. Robertson, and files on several related families such as the Wylde family (Elizabeth's mother's family); Harry King Stewart, of the Gordon Highlanders, who served in the Egyptian campaign; and Harry King (1807-1865), a prominent barrister of Windsor. Also includes information regarding the importance of the King-Stewart letters, which are held in the Library and Archives of Canada. The collection includes two large framed oil paintings, a portrait of Harrry King, believed to have been painted by William Valentine, and a portrait of James S. Stewart (1803-1860) by Albert Gallatin Hoit. FInally, the collection includes a Victorian-era "Scrap Album", created by Captain Arthur C.T. Boileau, Royal Artillery (Woolwich, England), containing various notes, cards, ephemera and memorabilia. 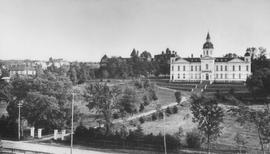 Collection consists of photographs taken by Notman Studio of Halifax, Nova Scotia and consists mainly of individual and group portraits of residents of, and visitors to, Halifax. Also includes naval ships and personnel, and buildings, streets and views of Halifax, as well as other Nova Scotian communities, including Antigonish, Canso, Dartmouth, Grand Pré, Musquodoboit Harbour, Sheet Harbour, Truro and Whitehead. Predominantly proof prints; also includes glass negatives, both wet- and dry-plate. Photographs organized by format, and within each format by original negative/proof print number. 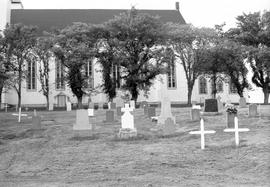 Collection was created during 8 field trips and consists of black and white photographic negatives and contact sheets of 60 post-Deportation (after 1764) Acadian cemeteries, supplemented with colour prints of the oldest surviving cemetery at St. Pierre Catholic Church in Chéticamp on Cape Breton Island, Nova Scotia, and a typed inventory describing each negative. This is not a comprehensive collection of all Acadian grave markers. Rather, the photographs represent a sampling of grave stones and monuments dating from 1817 (earliest found) to 2002, selected by Dr. Ross for their physical characteristics, French language inscriptions and historical significance. Examples in wood, stone, concrete and metal are depicted, as well as representative family names and at least one World War I or World War II veterans’ grave marker from each parish community. The layout and geographical site of each cemetery is also captured. Dr. Ross organized the photographs by community and within each community, by church cemetery. She also created a written inventory describing each photograph including the French inscription with English translations, a provincial map showing cemetery locations and a final report to the funder outlining her cultural analysis. The photographs were taken by Deborah Trask. This Collection shows the influence of French culture, and in particular the longevity of the French language, in Nova Scotia’s Acadian-founded communities through an examination of cemeteries as cultural artifacts over time.