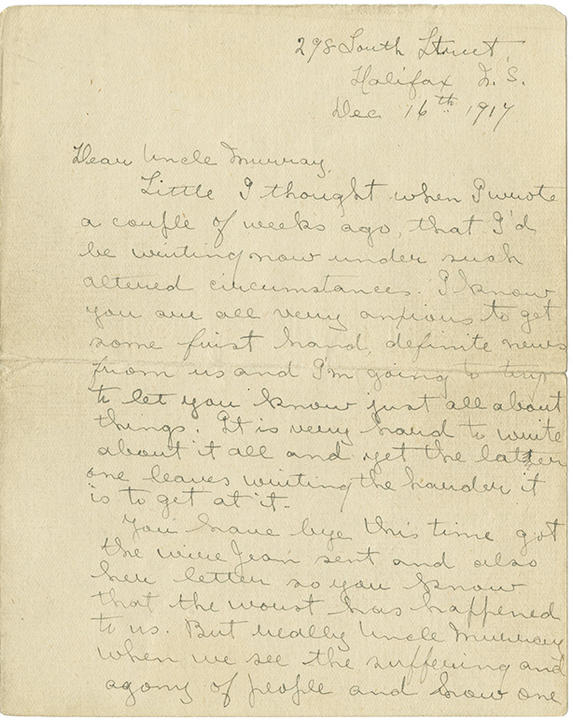 Murray McLean Kellough was born on a farm near Lake Egmont, Nova Scotia, on 21 February 1874, the youngest son of William and Elizabeth Kellough. As a young man he moved to Halifax and worked in the grocery business. He subsequently worked in the same field in Boston and Winnipeg. He lost his Winnipeg business during the Great Depression and subsequently worked a small farm in Selkirk, Manitoba, growing experimental crops and studying at the University of Manitoba. On 30 January 1907 he married Jessie Russell Phillips of Halifax and together they had three children. His wife died on 21 January 1919 from influenza and his children were sent back to Nova Scotia for a year. Thereafter, they returned and his wife's older sister, Annie Blanche Phillips, helped to raise the children. Ultimately, Murray Kellough moved back to a small farm on the edge of Winnipeg. He died there on 27 July 1965.

Ethel Jane Bond was born on 3 November 1888, the daughter of Alexander (1858-1917) and Margaret (née Kellough) Bond (1858-1903). She graduated with a BA in 1911 from Mount Allison University. She was engaged to be married to Frederick Hockin (1884-1917), son of Rev. Arthur Hockin, a minister of the Kaye Street Methodist Church in Halifax. He was killed on 27 July 1917 serving with the Canadian Infantry – 1st Battalion in Europe. At the time of the Halifax Explosion she was living with her father and sister, Bertha, at 35 Kaye Street in Halifax. Her father was killed instantly and she and her sister were displaced. At some time after the explosion a roommate from Mount Allison contacted her from Winnipeg because she was struggling with tuberculosis. Miss Bond travelled out to Winnipeg to care for her and assist in her job conducting social welfare in the city. This led her to undertake a diploma in social welfare at the University of Manitoba, where she studied under J.S. Woodsworth. During this time she lived with her uncle, Murray Kellough. While living in Winnipeg she renewed a friendship with Harold M. Hockin, the younger brother of her deceased fiancé. They were subsequently married in 1919 and lived the balance of their lives in Winnipeg. Mrs. Hockin died in December 1958.

Fonds consists of a pass for access for the devastated area issued by the City of Halifax and a sixteen page hand-written letter by Ethel Jean Bond to her uncle, Murray Kellough, of Winnipeg, Manitoba. In her letter she describes the devastation of the Halifax Explosion, the death of her father, and the injuries that her sister Bertha sustained, and discusses the impact on various neighbours in the vicinity of Kaye Street in Halifax, including the Swetnams, Killams, and Theakstons, among others.

Swetnam family fonds - Accession 2010-008 (Rev. William Swetnam's second wife was A. Jean MacDonald, who was a niece of Murray Kellough).

The letter in this fonds is referenced in Survivors: children of the Halifax explosion by Janet F. Kitz, which was published in Halifax by Nimbus Publishing circa 1992.