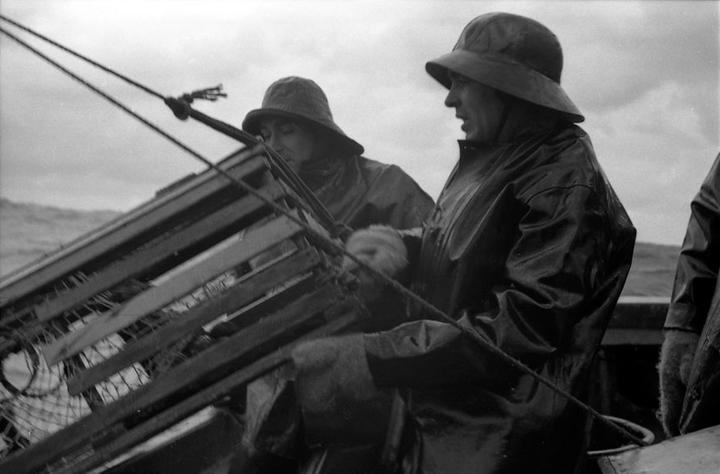 Alexander Hamilton Leighton was born in Philadelphia, Pennsylvania on 17 July 1908 the son of Archibald Ogilvie Leighton (b. 1880 in Ballycarry, Northern Ireland) and Gertrude Ann (Hamilton) Leighton (b. 1888 in Sligo, Ireland). At the age of 8, he was brought to Nova Scotia by his parents and was a frequent summer visitor from then until 1975 when he joined the faculty of Dalhousie University as a landed immigrant of Canada. In 1989, he achieved dual citizenship. As a young man, he became interested in photography as a medium for recording history and enhancing appreciation of the natural environment. Using the motion picture camera, he recorded a trip he made across Nova Scotia by canoe in 1927, and in 1936 he made a movie of a group of Mikmaw First Nation People hunting porpoise in a birch bark canoe and then of making oil to sell. He also used motion picture film to record his study of beaver in their natural Nova Scotia habitat. This study became his honors thesis at Princeton University where he received a BA degree in biology in 1932. He received an MS from Cambridge University in England in 1934 and an MD from Johns Hopkins Medical School in 1936 and became a resident in psychiatry but was also given leave for further study and field work in anthropology. He was called into service as a Naval Reserve Officer after the bombing of Pearl Harbor in 1941. During the Second World War he conducted a study of a Japanese Relocation Center and directed the Foreign Morale Division for the Pacific of the Department of War Information. After the war, he became a Professor in the Department of Psychiatry of the Cornell Medical School and in the Department of Sociology and Anthropology of Cornell University where he began the Stirling County Study, a longitudinal investigation of mental illnesses in the population at large with emphasis on relationships of prevalence of mental illnesses to social environmental factors. In 1966, he formed the Department of Behavioral Sciences of the Harvard School of Public Health and in 1975 joined the Dalhousie Faculty as a National Health Scientist of Canada and as Professor in the Department of Psychiatry and in the Department of Community Health and Epidemiology. At this time, his wife, Jane M. Murphy, who had been part of the longitudinal study since 1952 became its director. Alexander Leighton received numerous awards and honors including honorary doctorates from Acadia University and Laval University. He died at his home at the age of 99 on 11 August 2007.

Fonds consists of photographs (negatives, contact prints, selected enlargements, and slides) created and accumulated in the course of the Stirling County Study directed by Leighton. The fonds consists primarily of prints and negatives taken by chief photographer John Collier Jr. which depict Digby County, Nova Scotia, including the communities of Digby, Bear River, Cape St. Marys, Freeport, Westport, Weymouth, and numerous others. Includes images of traditional industries (agriculture, fishing, logging, and family businesses), family, social, and religious events, schools, churches, housing, residents, and general views and landscapes. Other photographs include aerial views of the study site taken by the Royal Canadian Air Force; scenes of Digby County from various sources; the Navajo community at Fruitland, New Mexico, USA, relating to a parallel study at Cornell University; and a small number of photographs accumulated by Leighton during his travels to Europe and Africa. Fonds also includes 16mm film reels containing mostly raw footage and work prints relating to the study in Digby and parallel studies in Nigeria and New York, as well as two documentary films shot by Leighton; one film entitled "Porpoise Oil" was produced in collaboration with the Mi'kmaq of the Bear River Reserve in 1936 and features a re-enactment of traditional hunting methods.

Photographs donated by Alexander H. Leighton and John Collier Jr. in 1988. Films donated by Leighton between 1987 and 1989.

Photographic portion of the fonds formerly known as the Stirling County Study collection.